After starting life at local club Watford in 1994, David Connolly was considered one of Irish football's brightest prospects. Earning his Republic debut in 1996, the London-born striker would score 10 goals for Watford before his 20th birthday.

With Ireland he earned his first senior cap under Mick McCarthy against Portugal. His first goals were against the USA and Mexico in the 1996 U.S. Cup, where the 19 year old Connolly was the tournament's joint second top goal scorer.

His performances with Watford were such that he was snapped up by Dutch giants Feyenoord on a free transfer in 1997.

Connolly was another of several Irishmen to grace Dutch football in the 20th century. Jack Kirwan, Peter Fitzgerald, Paul Bannon, Paul McGee and Frank Stapleton had all tasted action in the Netherlands, with varying degrees of success and failure.

Founded in 1908, Feyenoord are one of the big three in Dutch football, alongside Ajax and PSV. Hailing from the port city of Rotterdam, they play at the De Kuip stadium. Feyenoord have 14 league titles and 11 cups to their name, and are one of only four clubs never to have been relegated from the Eredivisie (Holland's top flight).


As Feyenoord had come second in the previous season's Eredivisie, they would compete in the 1997-98 UEFA Champions League, Connolly's first taste of continental football. Feyenoord were dealt a nightmare draw alongside Juventus and Manchester United. Bringing up the rear in Group B that year would be Slovakia's Košice.

At the Stadio Delle Alpi on 17 September, Feyenoord were given a harsh lesson in football as Juve ran out 5-1 winners. Connolly came on in the 68 minute after goals from Alessandro Del Piero, Pippo Inzaghi and Zinedine Zidane had Juve up 4-1 already.

Connolly again came on as a substitute in Feyenoord's 2-0 home victory over Košice two weeks later, but saw only 10 minutes of action. He made his first  European start for the club later that month in their 2-1 loss to Denis Irwin's Man United, coming off in the 72 minute. In December he started again as they won 0-1 away to the Slovakians in the pool's last game. Feyenoord finished the group stage on 9 points, three behind 2nd placed Juventus and were knocked out.

The competition was won by Real Madrid that year. 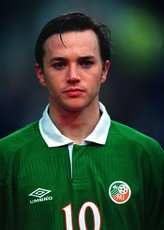 Back on the domestic front, Feyenoord were performing poorly in the League, and Haan had been sacked by October. His replacement Leo Beenhakker, initially saw promise in Connolly, but eventually began to drop the Irishman in favour of more experienced squad members.

On 24th May 1998, Connolly had the strange honour of being the only non-English based player in the Ireland squad, as the Republic lost 1-2 away to the Czech Republic in Prague. (This feat was repeated two years later in Dublin, once more against the Czechs. That time Ireland won 3-2.)

By season's end, Feyenoord finished 4th in the League, meaning no Champions League football the next year. Connolly had made just ten appearances for them, scoring 2 goals. In the Cup they were humiliated 4-0 by rivals PSV in the semi-finals. A poor end, to a poor season.

Connolly's start to life in Rotterdam had been less than impressive. As the highest paid player in Holland, he had not lived up to the belief that the club had shown in him. He was also failing to dislodge first team regulars. Added to this was a difficult relationship with Beenhakker, who was keen to get rid of the cocky young striker.

"I thought about hanging in and seeing if I could reclaim my first team place at Feyenoord. Of course I did." said Connolly, at the time. "But the writing was on the wall when the new coach Leo Beenhaker took over from Arie Haan, the guy who signed me.

"Beenhaker didn't rate me highly. It's as simple as that. He was reluctant to even give me a chance to prove I could do a big job for Feyenoord.

"Every player wants to be part of the action - particularly when you live abroad and football is your only outlet. It felt like hell at times to be rejected.

"But then when a club like Wolves come in for you, you don't hang around."

Irish-friendly Wolverhampton Wanderers were then in England's First Division. On loan at Wolves alongside Robbie Keane, Glen Crowe and Dominic Foley; Connolly played a part in their push for promotion that season. He scored 4 goals against Bristol on November 7th, his first for the club. This was followed by two more strikes, but Connolly's time on the field was limited by the form of young Keane. Wolves finished 7th in the table, 3 agonizing points off a play-off spot.

Back at Feyenoord, he was again deemed surplus to requirements by Beenhakker, yet the princely sum of his salary meant that offloading him to a suitor, would prove difficult, at least permanently.

So he was loaned out again in the summer of 1999, this time to Excelsior. The move was unsurprising, as Excelsior were then a feeder club to Feyenoord and players were regularly sent there to earn their stripes. After failing to really impress in Wolverhampton the club felt as they were paying his wages they might as well attempt to develop him, this time in a slightly easier league.

The season in Holland's second tier was Connolly's most successful in football. In just 32 games with the club, he notched in an incredible 29 goals. This was noticed by the Feyenoord fans. Having seen their side finish 3rd in the league, a miserable 20 points behind winners PSV, they began to demand the Irishman's return.

These demands, while not immedietly taken aboard were considered. In July 2000, Beenhakker was replaced by Bert van Marwijk. This change would in time spell a major turning point in Connolly's Dutch experience, as the new coach would keep a close eye on him as he spent another season with Excelsior.

In September, Connolly made a substitute appearance for Ireland in Amsterdam, as the Boys in Green took on Holland in a difficult World Cup Qualification match. A memorable game, Ireland were famously 2-0 up after 65 minutes, only to concede late goals and draw 2-2. The result was hailed by some, yet decried by others. Connolly had been a 73 minute substitute but made little impact.

The first half of the 2000-01 season at Excelsior saw Connolly again show formidable form. He bagged 13 goals in just 16 games with the club, yet more evidence that he was playing in a league well below his ability. Back at De Kuip, van Marwijk had problems. The departure of Julio Cruz and injury to Korneev left him with a shortage of options up front. So that December, van Marwijk recalled the Irishman to the Feyenoord squad. By now the team was packed with notable talent including Dudek, Bosvelt, Christian Gyan, Jon Dahl Tomasson, Johan Elmander, Patrick Paauwe, Ebi Smolarek and Brett Emerton. 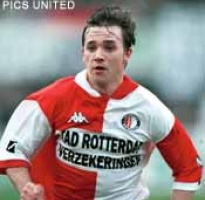 This recall would spell the beginning of a 6 month renaissance for him at the club. Beginning with an away tie to Fortuna Sittard, the Irishman scored their first goal as Feyenoord ran out 4-2 winners. He said at the time, "It is going well for me again in Holland. I scored last Saturday and I'm feeling sharp. It is a big lift to be playing well again in front of 50,000 home crowds at such a really big club, knowing that the fans are behind you. "

His moment of glory however came on May 13th.

52500 spectators crammed into the Amsterdam Arena that day as Ajax played host to Feyenoord in a crucial Eredivisie tie. With PSV having already wrapped up 1st place, it was down to the league's other two forces to claim 2nd spot, pride and an automatic spot in the 2001-02 Champions League.

Known as De Klassieker, the Ajax-Feyenoord tie is considered the main rivalry in Dutch football. Associated with severe acts of violence and hooliganism, this match is considered a contest for the pride of the land.

Lining out for Ajax that day were Fred Grim, Christian Chivu, Tomas Galasek and Shota Arveladze. With Feyenoord were Dudek, Emerton, Tomasson and David Connolly.

With just 7 minutes gone, Connolly grabbed first blood for Feyenoord. Collecting a fantastic pass from Bonaventure Kalou, Connolly got ahead of his marker to slide the ball past Grim.

Arveladze equalised 6 minutes later, and on the 18 minute sent Ajax 2-1 ahead. The scores remained this way until substitute Leonardo smashed home a goal to make it 2-2 on the 61 minute. Connolly then sent the Feyenoord faithful into raptures when he scored his second of the night. Emerton had collected the ball on the right wing, and then simply cut the ball across Grim's goal for the onrushing Irishman to smash in, and Feyenoord were up 3-2.

On 73 minutes, Tomasson sealed the win for the club, although Ajax did pull one back five minutes before time it wasn't enough. Feyenoord won 4-3, Connolly was Man-of-the-Match.

It was a fantastic night for Connolly. Having endured so much doubt and confidence crises since signing, he had finally arrived and was set to become a star. Indeed, its not just his goals that were pleasing, but his overall performances. He scored his last goal in a Feyenoord shirt a week later in a 2-2 draw with Utrecht.

He signed in 1997, but it would take four years for him to make his mark. He ended his initial contract with Feyenoord on 12 games, 4 goals and 2 assists. Not bad, until you remember he was the highest paid member of the team.

With his stock rising high in Rotterdam, Connolly made the error of thinking too highly of himself. Against the wishes of the financially conservative coach, van Marwijk, the club offered the striker a competitive salary (although lower than his previous one), however Connolly rejected their proposal and asked for more. Talks between the two parties were locked for months, and rivals AZ Alkmar, Roda and FC Twente expressed interest.

So, on July 4 2001, club president Jorien van den Herik, announced that Connolly would not be kept at the club, claiming that the Irishman was demanding in excess of 3 million guilders, an amount the club couldn't afford.

It was an acrimonious end to his time with Feyenoord. Van den Herik fumed that Connolly had no respect for the 93 year old club and the relationship between the two parties crashed. The striker may well look back on his last weeks in the Netherlands, and wonder if things could have been much different. The next summer, Feyenoord beat Borussia Dortmund in the UEFA Cup Final, with new striking hero Pierre van Hooijdonk netting two goals in the club's home stadium. It could have been David Connolly.

Contrasting to this, the Irishman moved to Wimbledon then in England's second tier, where he narrowly missed out on promotion to the Premier League in 2002. Future spells with Leicester, West Ham, Wigan, Sunderland and Southampton yielded a Football League Championship in 2007 and an FA Trophy in 2010. This respectable but rather average tally adds to the sense that Connolly, although his record shows him to be a prolific goalscorer, never reached the heights that he could have.
He managed to play for the Republic of Ireland in the 2002 World Cup, but his international career never again reached the heights of '96-'98, and he scored just 9 goals in 41 games. Although many of these appearances came off the bench. His last cap was in 2004.

Connolly now plays for struggling Portsmouth in the English third tier. What could have been...
Posted by Phil Farrell at 14:02