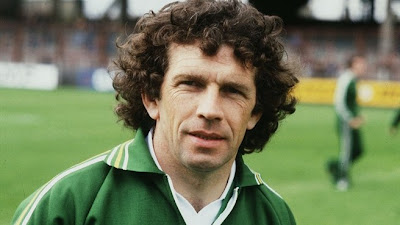 "As I look at all the talent and character at my disposal today, my one regret in that John Giles wasn't born an Englishman".

The famous words of England's World Cup winning manager, Sir Alf Ramsey. The man he speaks of is worth the sentiment. John 'Johnny' Giles, central midfielder, Dubliner and hard player was arguably the greatest footballer to ever come from the island of Ireland. A true great, who achieved glory with a fantastic Leeds United team in the 1960s and 1970s; Giles is a symbol of Irish football.


Yet while his exploits at Leeds, Manchester United and Shamrock Rovers are well documented and known, relatively little is remembered about his time across the Atlantic, in the glamourous and odd world of the NASL. First as a player, but mainly as a coach, Giles tasted some success out there, and is the subject of this entry.

After 12 years with Leeds and 7 trophies, Giles moved to West Bromwich Albion in 1975 as player-manager. His two years with West Brom were his swansong in England, as in 1977 Giles returned to Ireland to become player-manager of Shamrock Rovers.

The Shamrock Rovers project was intended to create a powerhouse in the country and a team that could compete in Europe. Giles was brought in to build a strong side, well disciplined and trained, that could realise this dream.

However just a year later, Giles would shock Shamrock Rovers' fans by deciding to go to America for the summer and play with the North American Soccer League's Philadelphia Fury. He was 38.

Philadelphia were a brand new franchise in NASL, having been just set up earlier that year. They played home games at the colossal Veteran's Stadium in the city, and were preparing for their maiden season in the NASL in 1978.

The side's first manager was Englishman Richard Dinnis and the team that year was a highly talented one. Included were English World Cup winner Alan Ball, Chelsea legend Peter Osgood and Irish international John Dempsey. Dempsey and Giles were two of 5 Irishmen, the other three being Fran O'Brien, Eddie Byrne and Pierce O'Leary, who had come with Giles on loan from Shamrock Rovers.

Back in Ireland, Rovers' fans vented their annoyance at Giles' decision to play in America that summer, as many felt that he should be preparing for the pre-season. The wider Irish footballing community were also annoyed, as many believed he needed to be home preparing for the 1980 European Cup qualifiers.

The midfielder himself justified the decision, correctly stating that "we have much to learn from the Americans about football promotion and development".

Meanwhile in America, the Fury were drawn in the NASL Eastern Division along with Noel Cantwell's New England Tea Men, the Tampa Bay Rowdies and the Fort Lauderdale Strikers. This meant that Giles & co. would be playing against the likes of Gerry Daly, Rodney Marsh, Mirandinha, George Best and Ian Callaghan.

In spite of their fine squad, the season was utterly disappointing for the Fury as they lost 18 matches, winning only 11. This left them bottom in the Eastern Division. Coach Dinnis resigned in mid season, and Alan Ball replaced him at the helm as player-manager.

The play-offs also ended disappointingly as they were knocked out in the first round by Trevor Francis' Detroit Express. Ball was named in the Team of the Season, but otherwise Fury won no other accolades. Giles himself put in 20 solid performances, including 3 assists. The 19 year old Pierce O'Leary played well too, making 14 appearances.

Giles, Dempsey, O'Brien and O'Leary
all feature for Fury against Rochester


After the Fury's play-off defeat, Giles and O'Leary returned to Ireland and Shamrock Rovers. However, the much vaunted project at Glenmalure Park was failing, and within a year, many of Rovers' professional payers had to revert to amateur or semi-professional status. They did manage to win the FAI Cup, but a League title remained elusive. In 1980, Giles stepped down as manager of the Ireland football team, he would also never play the game again.

In 1981, he further irritated the by-now highly vexed Rovers' fans once again by venturing back to the NASL for the 1981 season. He took up the offer to coach the Vancouver Whitecaps. He held this post until 1983, essentially making him the manager of two clubs at the same time.

Vancouver were founded in 1973, and in 1981 they played home matches at the 32,000 capacity Empire Stadium in Vancouver. In 1978 they won their first National Conference (Western Division) and repeated the feat a year later, this time going on to win the 1979 Soccer Bowl. The season prior to Giles' arrival had seen them finish 3rd in their conference and knocked out in the first round of the play-offs. The club's average attendances were on the rise, however, settling at 21,000 in the Irishman's first season.

He brought in some talented footballers, attracted to working with a man of such legendary status in the British game. Notable arrivals included Liam Buckley (who Giles took from Rovers), Jimmy Holmes, assistant manager Peter Lorimer, Pierce O'Leary, Dave Thomas and Terry Yorath. The distinctly British-Irish make-up of the squad was a suggestion of the type of football Vancouver would play. 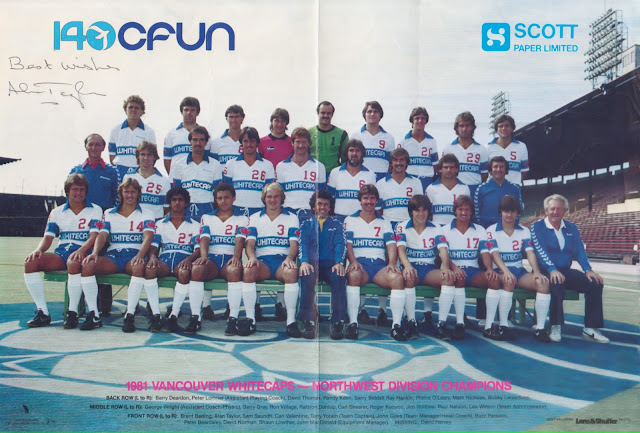 He managed to steer Vancouver to 1st in their Conference, beating the likes of the Seattle Sounders and Portland Timbers. They won 21 matches, but were ultimately hammered by the Tampa Bay Rowdies in the play-offs. New York won the Soccer Bowl and Giles returned to Ireland.

The following season saw Giles return to Vancouver yet again to act as manager. This time Peter Beardsley joined the side, bolstering a squad that still contained the likes of O'Leary, Yorath and Lorimer. 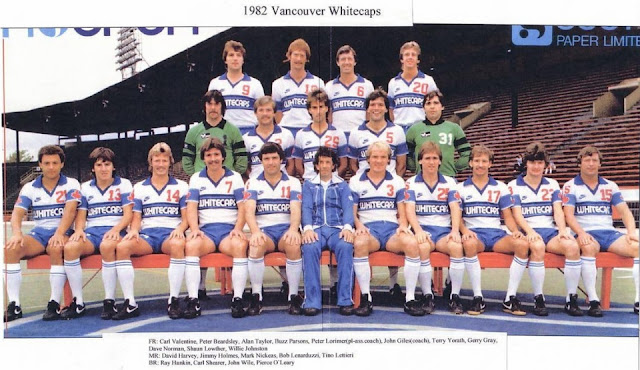 The 1982 edition of the NASL saw a change in format, as just three Conferences were set up, to of which contained 4 sides, but one featured 6. Vancouver were entered into the Western Conference of 6 teams, alongside Seattle, San Jose, Edmonton, San Diego and Portland. Giles' boys managed to win more games than any other side, but they still finished in 3rd, behind Seattle and San Diego. In the play-offs they lost 7-3 on aggregate to the San Diego Kickers, while the Soccer Bowl was again won by New York.


For his part however, Giles was named Coach of the Year by the NASL, a feat which stands as testament to the impact that he did have in the league and in the development of soccer in Canada.

The next season at Shamrock Rovers was his last. For reasons which are not worth discussing here, the grand project had been a failure. The grim reality of Irish domestic soccer destroyed the ambitious dreams of everyone at Glenmalure Park, and Rovers would suffer as a result. They would not be a major side in Irish football for another generation.

After leaving the club, Giles did return to Canada for one last season with the Whitecaps. Now, no longer tied to two clubs, he could give all his energy to Vancouver. Big signings were made in the form of David Cross, Mick Martin, Frans Thijssen and David Watson for 1983. 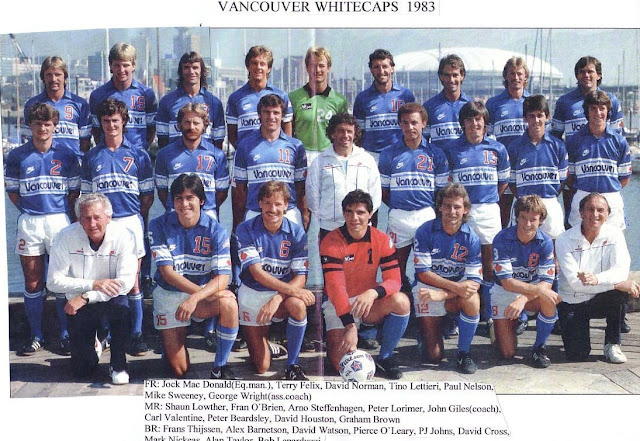 Giles led the side to 1st place again, his second trophy in NASL, in the Western Division, however they once again faltered where it mattered, in the play-offs by losing to rivals Toronto. A 0-1 loss on September 15th 1983 was Giles' last game in North America. He left in a bit of a cloud however, with allegations that he received a cut of transfer fees received by the club.

The NASL was in dire straits anyway. The golden era of the mid to late 70s had passed. In 1983 just 12 teams entered the competition, and attendances were generally low. The Tulsa Roughnecks won what would be the second last season of that fine league, before the whole project collapsed a year later.

In 1986, a new Vancouver Whitecaps emerged in the America Soccer League, and in 2010 Major League Soccer was blessed with a revival of the franchise as a major side.

Giles's last hurrah in football came at West Brom, where he managed the side briefly in the 1984-85 season. After his stint at the Hawthorns however, he retired from the game, and in 1986 became a senior analyst with RTE Television in Ireland. Today he is renowned in his home country for his tactical knowledge and footballing wisdom, and is rightly still considered to be the greatest Irish footballer of all time.


Giles' reputation at home is secured. His reputation in Britain too is not under question, as proven by his inclusion into the Football League Hall of Fame in 1999. Yet, around Europe he is not as well known as Liam Brady or Roy Keane. What a shame then, he never brought his game to international audiences while still in his prime.

A true legend though, who achieved success in places people are not aware of.
Posted by Phil Farrell at 09:10